End of the road

Bamako, someone has said, is the world’s largest village. At almost 2 million inhabitants, it’s anyhow an urban sprawl growing at a ferocious pace - drawing in seasonal workers, Moorish merchants, Peul herders and rural refugees from the Sahelian hinterland. The new urbanites tether their goats round the railroad tracks or unfold their vendors’ mats along the city’s thronged market streets and then proceed to flog laid-off western garments, cheap Chinese gadgetry or bitter kola nuts in a cacophony of competing voices. The city centre is a place of perennial commercial frenzy, like a village market on dope. 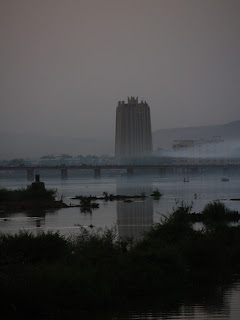 The mega-village has another inconvenience: pollution. Smog envelops the choked thoroughfares and the crammed bridges spanning the Niger river, where swarms of Chinese motorcycles vie for road space with a horde of cars multiplying by the year. And then there is the dust. The fine red dust that is everywhere, soiling clothes, coating cars and clouding the air on winter days when the Saharan harmattan wind blows. Shake and stir: the toxic cocktail of sand and smog makes Bamako an almost unbearable place. It is nothing like I remember it from my last visit almost ten years ago.
I’m not the only newcomer complaining of sore throat, itchy nose and dusty hair. A growing bunch of migrant adventurers from elsewhere in Africa have in recent times found themselves stuck in this impoverished mega-village. To them Bamako has become a crossroads and a dumping ground, a trap or a trampoline, depending on what stage they have reached on their journey.
Some adventurers end up here after expulsion from Algeria to the no-man’s-land of Mali’s far north. From there, the Red Cross ferrets those it can to the nearest urban hub, Gao, for onward transport to Bamako. Other migrants stuck in the red mud of Mali have not yet crossed the desert – they simply lack money to continue their journey, often after having lost their savings to unofficial “fees” at border crossings. Others yet seek that prized asset, a Malian passport, which will allow them visa-free entry into Algeria. Many adventurers wait for money transfers from friends and family or else drift into a vagrant, jobless existence while nursing dreams of a distant North. The lucky ones among the recent deportees get a rest at the house of the aid association Aracem, a rare lifeline for migrants in the city.
A small group of young Central African deportees lingers outside the association's entrance. The mood is sullen. The day drags on, slow like treacle. B. is a young guy I know from previous visits: he is cheerier than most. “It was my birtday on the 10th but I haven't been able to celebrate it, no means to do it,” he says in a matter-of-fact way, just stating the obvious. His daily budget is 300 CFA (€0.45), plus a couple of cigarettes. B. sleeps on a nearby street corner, where he and his fellow adventurers unfold their plastic mats on a storefront verandah once the shopkeeper has closed for the night. Still, he looks rested. He asks if I am feeling better after my recent bout of malaria. I remark that he seems remarkably healthy himself, despite the rough sleeping and the lack of food. “It’s by the grace of God,” he says. Since embarking on his erratic journey towards North Africa and Europe in 2006, he has never been sick. “God protects us.” This protection does not seem to extend to financial matters, though – B. had paid someone for a fake Malian passport, “but they ate the money”.
Now he seems lost for ideas: he might try to head to Algeria again, or Mauritania. We look out over the dusty, late-afternoon street as a golden haze starts descending over the city. It's a disheartening sight. The mud road is bumpy and strewn with flattened garbage coloured ochre by the dust: water bottles, old flip-flops, plastic sachets. Little children play at the shuttered shopfronts. Two small stores are still open for business, but few customers get close. The poverty is palpable. Three girls come walking past, dressed in the usual Malian sarongs, swinging their hips lazily. Another day grinds to a halt in the sleepy mega-village.
Posted by Ruben Andersson