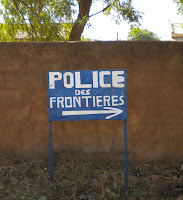 Against the the pitch-black parking lot, the neon lights of the nearby stadium make it seem an apparition, a stranded spaceship. In the darkness below, travellers scribble names and destinations on strips of cellotape, affix them onto the luggage and haggle over the price. “I’m American, I’m not used to this!” shouts an angry woman before breaking into Wolof. I step back from the hubbub and talk to our Malian bus driver, who does Bamako-Dakar three times a week. His Cameroonian colleague boasts about crossing the Sahara a few days ago, ending up in Oran in Algeria. Isn’t it difficult? “Nah, c’est facile!” People leave worn-out tyres in the sand to indicate the best desert piste, like hikers leaving mounds of rocks. And of course he gets a fake Malian passport, like clandestine migrants do – Malians enjoy visa-free entry. What about the military? “If they see you have money, it’s fine.” Speeding off in your own 4x4 is clearly a smoother ride than sharing one with 20 other migrants.
As we leave Dakar, Malian music starts pouring out of the speakers. It hardly stops – give or take a few hours of French schmaltz and a handful of toilet stops – until we reach Bamako 32 hours later. “Well, it’s Saturday night”, giggles my co-passenger, a young Gambian living in Dubai. She is off to Bamako to buy bazin batik wear, all the rage among West African fashionistas.
At the border in Kidira, the business begins. The policeman collects passports and identity cards, then ushers us into a dusty courtyard. Next to a TV showing Champions League reruns, four Nigerians have squeezed onto a bench. They talk about how much they’ll need to fork out for the passport stamp. Almost 10 euros each is the answer: Nigerians have become a honeypot for underpaid border officials across the region.
At Malian customs, the air is thick with cloying, smog-fuelled heat. Cheap Chinese motorbikes line the parking lot, driven into Mali to avoid excess bribes. A vendor offers a clutch of high-heeled shoes to the ladies, while two Moorish lads lazily try to hawk thick winter blankets. “Mauritania?” one of the Nigerians asks the boys. “I recognise people from everywhere, I’ve been to more than 10 African countries”. He was once expelled from Mauritania when trying to enter Morocco.
At yet anoter fleapit stop, officers collect 1,000-franc notes in a thick wad from all the passengers bar one: me, the rich toubab. Sure, I have a visa but my fellow travellers have the right to cross borders freely, Schengen-style, as citizens of ECOWAS countries. I pay nothing at the five stops between Senegal and Mali while the Nigerians lose 16,000 CFA each, not to mention their temper.
In sweltering Kayes I meet the aventurier. He is 23 and on his way from his Dakar family home to Egypt and then, hopefully, to the West. He scrolls over a rasta-coloured map of Africa on his Nokia smartphone, showing me his maddening route across the Sahel and Sahara. “I’m not afraid,” he says coolly, a cigarette dangling from his mouth. Be careful, I say, there are rebellions and conflict in Chad and Sudan. I open the book Bilal by daredevil journalist Fabrizio Gatti and show him pictures of groaning desert trucks in Niger. “Now you have made me afraid,” he says as we board the bus. I feel a bit guilty.
We bounce through the Mande highlands, past isolated hamlets, baobab trees and roaring trucks, and don’t stop until late at night in a border town close to Mauritania. The place is dark and edgy. Security forces in military fatigues zigzag among the stationed buses, searching and shouting and making quick money. As we approach the coal-fired grills lining the road, the restaurateurs run towards us as a pack of hungry wolves, though we are the ones who haven’t eaten for the past 24 hours. Vien ici! they shout in an aggressive, syncopated cacophony. The aventurier tucks into his plate of greasy mutton, but isn’t that hungry. His mum prepared sandwiches for his transcontinental journey yesterday evening. Once we are done, a wild-eyed man in tatters asks if he can clean the bones. Back on board, my bottled water tastes of rancid smoked mutton.
We reach Bamako early next morning, after two sleepless nights and endless stops at makeshift road barricades. “Everyone says this is the crossroads in Africa,” the aventurier confides as we roll into Sogoniko gare, more a neighbourhood than a bus station. We have Nescafé with our fellow passengers, a crowd of young Senegalese hopefuls bound for Equatorial Guinea. They are living proof that most African migration remains inside the continent, contrary to European fears about an impending “invasion”. The sun rises behind a wall scrawled full with destinations: Cotonou 32,000 francs, Gao 16,000, Niamey 31,000.
I join the aventurier in checking buses to Niger. A cloud of incense smoke rises towards us as we enter the ticket office, shrouding us and the hustlers in a thick, coughy haze. “We have a bus to Agadez but no further, after that you use other means of transport”, we are told, but the aventurier wants none of the deadly Libyan desert. We walk on in the red Malian dust that has already soiled our clothes and backpacks. “So now it has begun,” he says as we reach a big road roaring with hundreds of those Chinese motorbikes we saw at the border. It’s his first day ever abroad.
He leaves for Niamey after we have set up an email account for his travels. Next to me, a young guy is checking Facebook in Tamil. Bamako is not only a crossroads for African aventuriers – it’s also a node for Asians on pre-paid packages to Europe. If he’s on such a deal he must have been waiting for a while, I gather: the computer’s desktop background shows a Tamil film hero astride a motorcycle, riding towards us through a pink backdrop at furious speed.
Posted by Ruben Andersson