The slow boat to Ceuta 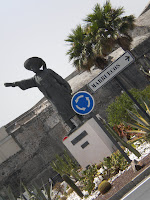 Ever heard of Ceuta? Nah, wouldn't think so. For the uninitiated, this is one of Spain's two minuscule African enclaves, perched precariously on a peninsula jutting out into the Strait of Gibraltar. It's a city teeming with Spanish soldiers, the odd (sometimes very odd) Spanish Foreign legionnaire, tourists pouring in on overloaded cars from the Andalusian ferry, and Moroccan day-trippers scouring Ceuta's single shopping street for European brands. "Ceuta - shopping ville" says the billboard at the official land border crossing, where tourists and workers and peddlers are ferreted through a long, fenced-in walkway. This is the only opening in what is otherwise a perfect armoury that separates Europe from Africa: a system of barriers, sensors and barbwire that runs around the enclave's perimeter, enclosing its little plazas, cosy bars and manicured beaches in a strangely Spanish bubble.

This enclave - recently branded an "occupied city" by Moroccans of the non-shopaholic variety - is where I've decided to explore the border dynamics of the new Europe in a bit more detail. The Strait of Gibraltar is, in the words of one Spanish journalist, a laboratory for the border regime being rolled out across the EU's external frontier. Gazing out over the waters, you can make out the Peñón - the Rock of Gibraltar - in the distance. "Mainland Europe", as it were, is frustratingly close for many irregular sub-Saharan migrants, who squeeze into inflatable boats to do the 14 km crossing. Some of those who are intercepted - and pretty much all are - end up in Ceuta's migrant reception centre on the outskirts of town. Others are sent straight back to Morocco. With summer kicking in, the numbers will surely rise in a seasonal flux that seems to continue despite the economic crisis that is triggering noisy trade union protests day in, day out along Ceuta's shady shopping street.
Posted by Ruben Andersson