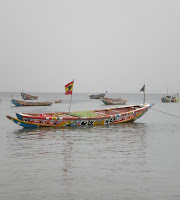 My anthromobile rolls out of Dakar now, direction London, then to new destinations along Africa's migrant routes. Here the summer high season for boat migration is off to an uneventful start - the coastline lies calm and quiet, though in Dakar's seaside neighbourhoods discontent is simmering. The policing front brings some news: the Spanish-Senegalese patrolling agreement has just been renewed for another year, while an Icelandic contingent has joined the Frontex mission off Senegal's coast - after first unloading a boatful of charity supplies.

These months I've bumped along potholed roads with police patrols, hung out with embittered and impatient repatriees who once braved the waves to the Canary Islands, and reminisced about the heady days of border crossings and expulsions with aid workers and migrants alike. It's all still a blur, but a picture is somehow slowly emerging of a phenomenon and mode-of-being that has only emerged in full force in recent years: that of clandestinity. The 'clandestine migrant' hovers like a ghostlike presence beyond the complete grasp of the police forces, journalists, NGOs and academics who make their living off him. One thing, though, stands out clearly in the haze of half-truths and doubts that surrounds the clandestine migration circuit: the security force cooperation that has developed in response to boat departures has made Europe's southernmost maritime borders more tangible and visible than ever. Except, perhaps, for a Swede boarding his 6am plane, Schengen passport in hand, bound for Casablanca and good ol' London.
Posted by Ruben Andersson