Mauritania through a fence 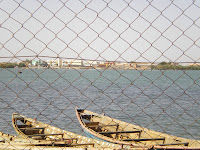 The road winds, tired and dusty, towards the border. The cramped car lurches over holes gouged out of the tarmac and swerves to avoid sand pits where chunks of asphalt are missing. This dismal track from St Louis on Senegal's northernmost shore hugs the river and, with it, the Mauritanian border: here, where Arab and black Africa nudge each other, there's something resembling a natural frontier, not just one of those straight colonial lines drawn up at the infamous Berlin Conference.

The djinns are out in full force: the Saharan sands swirl as we drive past bone-dry border outposts and, somewhat ironically, a Red Cross camp for flood victims from last summer's rains. At times forlorn figures appear in the haze - youngsters scattering sand over the holes in the road as we pass, hoping we'll chuck them some small change. The region's employment prospects, in a rusty bucket.

Then we finally reach our destination. In Rosso, sub-Saharan Africa ends - or begins, for intrepid European overland travellers - in a dump. Rosso reeks of garbage, roars with stationed Moroccan trucks, heaves with flies and hustlers and money-changers hungrily flogging useless ouguiya for euros or franc CFA or anything that smells of hard currency.

I love the place. It's the border, incarnate. Wooden pirogues ferret commuters, commercants and - perhaps - clandestine migrants across the deceptively blue Senegal river. People bathe next to the rubbish-ridden jetty. There's little by way of border checks amid the stacks of Spanish beauty creams and Moroccan biscuits that, for whatever reason, are a hot piece of merchandise at Rosso's manic bus terminus: they taste like caked sand. A man draped in a flowing boubou tells me he's the undercover narcotics police. Another fellow in a tattered uniform sharing a bench with a mix of Moors and Senegalese is supposedly checking people's vaccination certificates. The business of the border continues in its dirty, languid and lovely way.

That's until the returnees disembark. The frantic pace of expulsions might have subsided as of late, but the Mauritanian security forces still send luckless sub-Saharan migrants across the river in a pirogue at more or less regular intervals. Once they arrive, the Red Cross - in its Senegalese and Spanish incarnations - receives them, tired and penniless, expelled for supposedly trying to get to Europe without their documents in order. Some of them linger in Rosso, without money nor ideas of where to go next.

That's the case of three Liberians I meet. They have been here for a month now, sleeping rough or in the mosque and waiting - they say - for a money transfer from an elusive relative that will allow them to go back home. But it's hard to know if that's what they really want: the road seems to have sucked them into a vortex as dirty and indeterminate as the border zone they inhabit. "It's very difficult here with an English passport," says one of them, a woman who used to braid hair for a living in Nouakchott, the capital of Mauritania a few hundred kilometres up the road. Anglophones - who, together with other West Africans from far afield, are referred to as ñakk in Wolof - are not all that welcome in Senegal. Nor in Mauritania, where rumour has it that English-speaking Africans are not allowed to enter by land any longer. "In Mauritania, they say you're African - 'go back!'... Then they say they are from Europe... in Nouadhibou, they can see the lights from Europe."

The soft, comforting lights of Europe beckon here too, as I enter a hotel in the next-door hamlet Richard Toll after a long day at the border. A few steps away from the flies, the smells, the rough-sleeping migrants, a group of French pensioners on a €1,000-a-week cruise are playing boule next to a manicured riverside lawn. This is where Europe's border now lies, I sense: in this grimy parody of Senegal's riches that is Rosso and its languid river.
Posted by Ruben Andersson