"Fieldwork". A word that smells earthily of soiled fingers, an anthropological incantation whose connotations of slogging it out with long-lost tribes translates oddly into most other languages. Travail sur le terrain? Trabajo de campo? What's the Wolof equivalent?

But the funniest thing with the concept is hardly its untranslatability: it's that it's neither "work" nor takes place in a "field", however much the anthropological tribe that's sprung forth from our revered founding father, Malinowski, insists on the contrary.

The field is a state of mind, and a state of utter frustration, solitude and agony at that. And it's getting to me, big time. 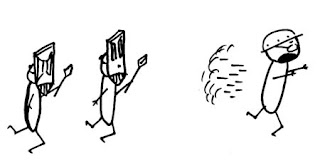 Today my early-morning date - a soft-spoken, boubou-draped Senegalese policeman - stood me up. It's 8am at the grimy port of Dakar: my date all gone, my brain barely awake. Like an abandoned lover I wandered aimlessly across my "field" - the cosmopolis that is the downtown Plateau district, heaving with expats, vendors, tourist guides and other People With a Purpose. Drawing comparisons between my fruitless ambles and the travails of good ol' Malinowski, sat in his Melanesian hut in the heydays of colonialism pondering the sexual life of savages is, alas, the only fun to be had for this anthropologist-in-the-unmaking. I make phonecalls - someone should write an ethnography on the perlocutionary force of dull fieldwork phone conversations, voicemails left to rot, emails painstakingly typed on French cybercafe keyboards for the sole benefit of a voracious Outlook trashcan - without success. And to top it off, the only wordly reward that my basic Wolof brings is a measly heap of beans in the downtown Sandaga market. Ah, the joys of fieldwork. Soon enough, to escape the heat, the noise, the tape-recorded sales pitches blaring out of the impromptu market stands, I desperately need to leg it back to my little suburban hideout.

Oh dear, I'm an expat. Worse: an expat without a cause and without one of those omnipresent 4x4s packing the sand hard on the sidestreets of Dakar's posher neighbourhoods.

I sweat it out on a city bus, as anthropologists enthustiastically do to get up close and personal with the natives, only to be told it's not going to my destination. Instead I'm left at the mercy of one of the minibuses roaring through Dakar's bottlenecked streets; hostage to the heat, ah, the heat, and the coughing engine, and the noise, and my funny-looking legs, jammed as they are into an impossibly contorted position. Then we stop, yet again, to wait for more passengers. The clock is ticking. Migrants, where are all the migrants, my elusive object of study? My field lies fallow and hot: I'm just a silly toubab in a packed van. In pure frustration I indulge in a simple act of passive aggression: I grind my teeth and press my head against the plastic window. Crrk, it says, and comes unhinged, the last gluey bit of rust finally giving way under the sweaty anthropologist's forehead and, as the bus hits another bump in the road, the window gladly throws itself onto the dusty tarmac with abandon. We screech to a halt, pick it up, and wait for a few long hot minutes as I do the Swede, as the Spaniards say - it wasn't my fault, was it? At least I do get the benefit of extra ventilation once the engine roars into action again.

That's my day in the field, folks. I'm inclined to blame my inner Mr Bean for all the anthropological anomie, but a frank recent AnthropologyMatters article suggests it's not all his fault. Would be happy to hear from anyone else, anthropologist or not, facing similar frustrations in that field that is the world that is the mind that is the mind helplessly locked into a world not altogether of its own choosing. Cheers.
Posted by Ruben Andersson