My friend the people smuggler

"Ah! You're writing about the pateras." J's smile lights up the rain-swept Gran Canarian patio. "I know of some French journalists who went to Western Sahara, made a documentary there, they even took the boat to the Canary Islands, filming everything. If you want, I can help organise something. I have contacts. You could make good money with a film." He used to make good money too - J's line of business used to be people smuggling. But his story belies the usual stereotype among politicians and journalists of "unscrupulous traffickers" - he helped two brothers do the crossing, and then went himself. He knows the routes, how to evade paying bribes to the Moroccan security forces, how to quick-inflate a zodiac boat, how to steer the course from a beach in Western Sahara to Gran Canaria's shores in 24 hours. And he's happy to serve up stories about his journey, genereously peppered with the bravado of a jetset-style clandestine crosser. 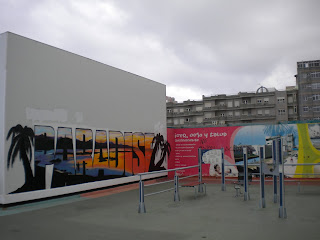 But among many of those he and his ilk have ferried across the waters, a taboo seems to surround the crossing. A Senegalese man I meet says he never asks fellow countrymen how they arrived. But if some of them were ever to trade insults, it might sound like this: "I arrived in Spain with a visa, but you, you almost died trying to get here." There's a word for those who have come by sea: wa gaal gi, "boat people" - cayuco people - in Wolof. And I get the feeling it's hardly a compliment.

Meanwhile, my "smuggler" friend revels in memories of his once so profitable business. The situation has changed mucho, mucho - it's not the same, the police is everywhere, people have started realising that fortunes are not waiting for them on Spain's shores. He's looking for work himself, but nada. As I leave, he tries his sales pitch again: "I still have a zodiac in a garage in Morocco... I could inflate it, you could write a story, just give me a call! You could make lots of money!"
Posted by Ruben Andersson