Strong winds at the edge of Europe 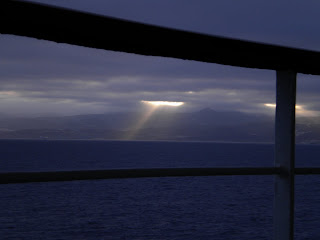 Fuerteventura, island of fierce winds and a few too many sandblasted northern Europeans, is my starting point on this anthropological roundtrip to West Africa. After the dunes and gloomy resorts of the north, this Canary island's capital - Puerto del Rosario - comes as a surprise. Sleepy and rundown, with streets named after long-dead comandantes and almirantes, Puerto feels like a bordertown - the African coast might be 100km away, but the frontier is never far off. The navy, Guardia Civil, and assorted state agencies line the seaside promenade; Sahrawi women in loose, pastel-coloured robes and black Africans mingle with local builders, port workers, brothel staff and discombobulated tourists.

The crisis of the pateras - small fishing boats carrying clandestine migrants from Tarfaya in Western Sahara - has receded, and spectacularly so. The island's detention centre for foreigners, El Matorral, held a couple of thousand Africans in its heyday a few years back; now it's empty, says a local aid worker, with a smile and a shrug. Funding's being cut, either because of the economic crisis battering Spain or the drop in boat arrivals, or both; queues of downcast African migrants no longer line up in front of NGO offices. Spain's government is claiming "victory" in the "battle" against clandestine migration, and says it's thanks to increased policing in the Canaries, at sea and on African soil that numbers have dropped. But is that the whole story? And what is happening beyond those inviting waves, which seem to have morphed into a solid, almost impenetrable border since the boats started arriving en masse in the middle of the last decade? That's what this blog will try to unravel.
Posted by Ruben Andersson